After the long trip from Warsaw in Poland, where we now live and work, we arrived the 7th of July on the ship, which had been craned into the water a couple of days before our arrival.

Sun was shining and after cleaning, putting up the sails, storing and provisioning, loading the batteries and getting as much fuel as we could , we decided to leave early the next morning.

We departed Krk, at 0730 on Sunday morning. We made 5’ on the motor (new oil and filters) in very light winds. Early afternoon gave us a nice Beaufort 3 from the West so we could sail to Simuni where we arrived at 1600. Temperature was now the usual 35 degrees Celcius so we spent some time in the water as well after this long haul. Cold beer tasted fantastic.

Winds were light and on the nose so we used our Perkins again.

10.15 wind turned East and we went 5.5’ on the genua, at 10.45 we passed the Vir lighthouse and changed course to 140 to Zadar. We arrived at the Morik Marina around 1400. I filled up my fuel tank with several walks to the fuel-station while the girls enjoyed the beach. Later we took the bus to town for sightseeing and dinner at our favourite restaurant.

The 10th saw us leave at 08.15 towards the Kornati. We passed under the bridge at 09.55 and we arrived already at our mooring close to the salt lake at noon. We put the dinghy in the water and we were off to the little lake on this beautiful island. (Dugi Otok)

Next morning Melitta and the girls went with the dinghy to shore for swimming and walking while I made the ship ready for departure. When they got back we had breakfast and afterwards I started the engine and let go off the mooring. In that moment we realised we had left our football on the beach! As we had our dinghy already on deck, Melitta took a dive and swam to the shore while I manoeuvred and anchored close to shore to wait for her.

Finally we could leave at 10.15, the weather forecast was good. After passing the narrow channel we went down South with a B5 in the back. Later around 1300 we changed course to 090. The wind got a little bit down to B4 but we had a great sail towards Murter where we found a berth at 15.30

The last part of this trip was a bit more than exciting, because it is very shallow and my depth meter showed fathoms instead of meters, which I only found out afterwards.

So, next day, Thursday the 12th, we left at 07.50 with Southerly winds on course 180 towards Rognicza. At 09.38 we passed Plic Kavlin and changed course to 125. We still had 20’ to go and we arrived around 1400 in the marina. In the evening we had dinner with Dutch friends we met in Warsaw and who were also in Croatia on holidays. The weather forecasts were not really favourable for the coming days and clouds were already forming in the afternoon.

Friday the 13th we left at 08.40, and once outside the bay (carefully navigating) we got B3-4 on the nose towards Trogir where we arrived around noon. This is a beautiful marina, it even had a swimming pool and a taxi-boat service to the old town. Stunning! I lost my zippo in the water while cleaning the ship.

We learned some lessons on Saturday. We left Trogir at 10.15, without any wind for the short sail to Split. In the Pilot it was mentioned that we could berth at the city centre opposite the harbour master (Luka Kapitana) but we were not welcome there, the information had expired. We then motored to a small harbour just South of Split (Seget) but the crew made a mutiny as that was too far away from the city center and we left for the ACI Marina.

Now you should never go to ACI Split on a Saturday as then all the charter crews are changing boats, by now we also got a bit of a blow and quite some charter boats were moving in front of the harbour entrance waiting for their turn. I got the harbour on VHF and they told us to wait until something comes free….in the mean time I saw a free slot next to a blue super-yacht and decided to get in. Turns out that place was reserved as well and by now we got worried that the Seget harbour would be full also and we were running out of alternatives. As I said before, more and more wind was coming and I decided to go back to the small marina just south of Split. The super yacht noticed my intentions and brought out their (HUGE) fenders to protect my ship from touching them. I let the wind blow Wanderer out of her berth, while guiding her bow alongside the other neighbour and when we were free I gave her a bit more speed backwards with the tiller to starboard. The wind blew her nose away from the wind and when our back was approximately 1 meter from the super yacht, I put the throttle forward, tiller to portside and off we went. I waved nonchalantly to the crew with the fenders as if this manoeuvre was not pure luck.

Full speed to Seget harbour as we were not the only ones going there. We took the last available berth and all were happy; there was a big pool opposite the marina and the city center was not so far after all. Service was excellent and friendly, we definitely plan to come back here.

We woke up next day with the wind blowing and after we checked the weather forecast we decided to sleep a bit longer today. We went to visit Split and checked all the sights. We had a very nice lunch with pizza, bread, cheese from Pag and very nice smoked ham. The beer was cold too. Wind and waves got more easy in the afternoon (if you want to be a Sailor, you have to go to Sea) and we made the short 2 hour trip to Kastel G. where we would be stuck for two days because of the Bora. Especially in the night the wind peaked to 40 knots and I was happy we were safe in harbour.

The 17th we moved to a lovely small town called Marina. This was a 4 hour trip which was very wet with wind 25 knots, peak we saw was 30’, of course on the nose. Although some motor boats were hindering the entrance to the port, we made it in 1 piece to the berth, completely neglecting the harbour master directions. A 5 ton ship with a long keel is great on the sea but in a small harbour with a lot of wind a bit different to handle…

We left Marina next day and went to the beautiful anchorage at Primosten. We had a splendid sail with wind between 10 and 20 knots. If you want a place here you need to reserve early. We arrived 14.45 and were very lucky to get the last mooring. Wind was blowing and the anchorage was quite rolly and we were happy not to have caused any damage to other ships while we tried to catch the mooring. In the evening the wind went down, I cooked a curry and we took the dinghy to town for ice cream and a walk around.

The 19th we were happy surprised with the forecast: No Warnings in place. We left 07.30 and arrived at 11.30 in Skradin. A nice and hot sunny day and with plenty of time left to see the waterfalls and the park. A bit too full of tourists for my taste but the rest of the crew enjoyed the day very much.

Next day: again no weather warning, hot and light winds, just as we like it. We left the hectic harbour of Skradin at 0800, watch out for the ferries! At 1100 we berthed the nose of the ship to the quay of old town Tribunj. A bit exposed but the weather forecast was still good. The ladies went to the beach for swimming and I took several trips with the jerry cans in the dinghy to the petrol station before joining them. We also visited the small island opposite the town.

The 21st we left as early as 0645 as there was a Bora warning in place. We left on course 260 which we altered to 300 at 07.30 and later we went 15’on 315. We crossed under the bridge again at 11.45 and we arrived in Preko one hour later to our (reserved in the early morning) berth. The Bora arrived that evening and stayed blowing for the next couple of days. We were stuck in this harbour but that was no punishment. The town is very nice and has some excellent restaurants and the whole island is full of historical places to discover. We made a great walk up to the castle and took the bus to other towns. Temperatures were quite fresh and sometimes even chilly!

The 24th showed just a bit better forecast and we left at 0800. We were the only ones leaving and other cruisers waved us good bye. We were on route to Simuni, on the way back, the end of the holiday was approaching. We had no more than 20 knots wind and we arrived safely and relieved. Later that afternoon the wind got much stronger again and we were happy we left early.

July the 25th. Departure 06.45, crew still sleeping. We go North along the coast of the Island Pag towards Rab. The wind is light from the South, there are a lot clouds and the temperature is lower than normal. We had reserved a spot in the ACI Marina but the assistant was not really helpful or friendly (maybe too much stress?). Anyway he could not spoil our day. The girls went off to the beach while I did the cleaning, getting electricity, water and fuel. That evening the big yearly Rab festival would start and we loved it. We got back on board well after midnight.

We arrived back in Krk at 12.25 after four and a half hours on the engine, on the way we met dolphins and we waved them good bye and till next summer!

At the mooring in the Kornati’s, close to the salt lake.

View towards the Kornati

We had more than our fair share of Bora this year 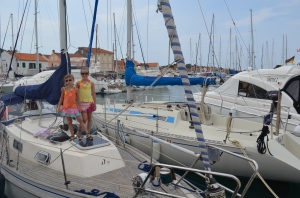 Back in Rab, just in time for the festival